It was a fine sunny day for the work party, and eight volunteers turned out to do their bit to keep the paths in the woods open and help improve them for wildlife.

At the previous work party, in December, we had made a valiant effort to clear the gorse-choked track from the cross-roads in the woods, to the north side of the loch – now known for evermore as “Gorse Alley”. Even though we made a good start, we ran out of time then, so this time we were keen to finish the job.  The track into the woods from Greenleonachs, although easily passable, was also getting overgrown. 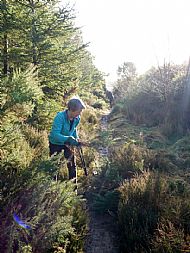 So, we split the group between the two jobs. We made good early progress on the Greenleonachs track (which, incidentally, is now part of the John O’Groats trail long distance path from Inverness to John O’Groats), but Gorse Alley was another kettle of fish.  So, after a break for elevenses and a blether, we focussed on the gorse.  As time ticked away and the end of the path hardly seemed any closer, conversation dried up and the loppers flashed! 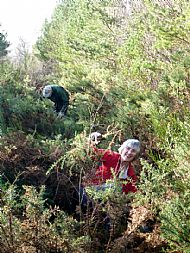 And the end result – just finished in time – is a new route for folk to explore. It’s still a little bit narrow in places, but it opens up two circular routes. To explore the northern bank of the loch, turn left at the far end of the newly-cleared track – but watch your feet, it’s a bit boggy in places. Alternatively, turn right and follow a good path to come out on the main forestry road close to the recycling car park. Do use them, otherwise they’ll get overgrown again in no time!

Thanks to the volunteers – and watch out for the next work party.