As the nights draw in and the colours change to autumn, it is good to remind ourselves of the summer lockdown Sunflowers for Culbokie, grown from the seeds that the shop kindly distributed.  We have created two collages from your photos.

Some told us stories: 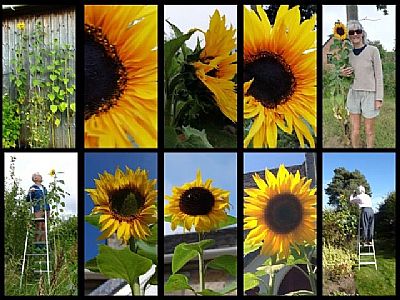 "My most advanced sunflower is a late developer – flowering only this week after so many months. Meet Olive Oyl, the sunflower which has always been the tallest, and now finally in flower. Popeye is on her left and further down the line Olive’s siblings Caster Oyl and Crude Oyl.” (Angela - Photo 1.1)

"Here’s a photo of Sebastian. He had a sister, Belle, but she never got out of the ground. Sebastian is about 3 metres tall!” (Martin - Photo 1.6)

“Whose idea was this?  Thought I had better take a photo before the next gale arrives.  There was a bee in the middle but it flew off just as I got the ladder organised..” (Elaine - Photo 1.10) 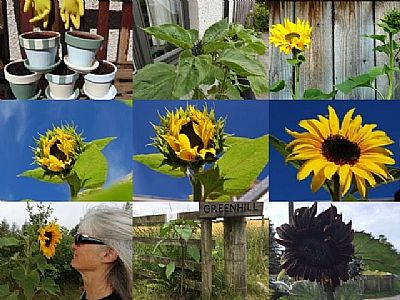 “My very dark sunflower is out at last.  The stem has 12 buds on it so I hope the weather holds to show a few more.  ‘Dark Chocolate' would be a good name although ‘Moulin Rouge’ is the correct one.” (Lesley R - Photo 2.9)

Sunflowers have been spotted all over Culbokie in recent weeks; we hope these photos will allow you to enjoy them even after they have faded in the garden.